I have two sickle mowers, a New Idea (NI) 30 that had sometime in its past been modified from pulled to 3-point, and a Massey Ferguson (MF) 31. I used the NI until the cast connection between the Pittman and the cutter bar broke, then bought the MF 31 to replace it. I was not experienced enough to realize that the MF was not in very good condition, but have since learned much. When it increasingly jammed, I learned a little and made some adjustments. It repeatedly broke the bolt that connected the cutter bar to the Dyna Balance arm. I finally gave up in frustration and payed my neighbor to mow (about 3 acres of grass hay, 3-4 cuttings/year) with his disk mower.

Over a period of about three years, his mowing deteriorated and last fall, I told him that because it was leaving too much behind, I would try to get my sickle mower back in service. That gets me to my problem. I've pulled the cutter bar of the MF 31, and removed all of the guards, hold down clips, wear plates and shims. I also removed the sections, which were all bad, with the exception of maybe two that were marginal. The ledger plates were all very bad. All of this probably explained the jamming, and probably also the broken bolts.

Some of the guards had broken or bent 'ears'. There was a mix of guards including about half that appeared to be original MF, one that was a later MF, but not the correct one since it didn't match the beveled bottom front edge of the bar, and four other miscellaneous guards other than MF branded. I pulled the guards from the NI mower, and found the ledger plates were a little worn, but not bad.

That mower had cut pretty good. I also recalled that I had replaced most of the sections so that they were also in pretty good condition. Before pulling them to reinstall on the MF mower, I compared cutter bars and found that the NI bar was 2-3' longer than the MF bar, and by shortening it and re-drilling the holes for the connector bar, it looks like I can use it as-is (with already installed sections) in the MF mower. So, the current plan is, use the NI guards on the MF bar, and modify and use the NI cutter bar in place of the MF cutter bar. I will also use wear plates, shims, and bolts from the NI as needed, and as they fit.

The questions. (1) Are the shims of different thickness so as to provide an adjustment, or are they for some other purpose? (2) How badly worn can the wear plates be and still be usable? (3) is there a web site where I can find a step-by-step overhaul/restore process description and/or a general checklist for things to check on a mower to make sure I've done all I can to make it work right?

I don't really know anything about adjusting wear plates, though I understand the process of adjusting hold-down clips and ledger-section clearance. (4) Any comments on this approach? As you might guess, at 3 acres of hay, this is really just a hobby, which makes dumping a lot of money into a new mower, or into a lot of new parts, not justifiable. I also don't know enough about tuning sickle mowers to know if even replacing all guards, sections, wear plates and shims with new, will result in a mower that does the job.

The rest of the mower seems good, but I'm not experienced enough to know. That's also why I don't go looking for a replacement used mower - I don't care to spend a lot of money and have a mower that still needs this kind of work to get it working. I noticed on one of the sickle mower sites that I could buy a MF 31, claimed to be in excellent condition, for about $1700 - but it's in Kentucky and I'm in WA!

The rest of my equipment includes a MF35 tractor (Perkins diesel), an old Ford side-delivery rake, and a John Deere 214WS baler (wire). When I first got it, the baler would fail to tie about 1 out of 3 bales. Over the period of a couple of years, we got it to where it is now, and rarely fails to tie, with the exception of the first bale in an empty chute. Any help would be greatly appreciated. FWIW.there is some time pressure since I've scheduled to mow my first cutting on 8 May. If no sickle mower, I guess I'll have to settle for my neighbor doing it and leaving probably 1/4 to 1/3 unmowed, that would otherwise be mowed with a sickle. Thanks for any help you can provide!

I have a MF31 mower that I bought at auction for $550. Rebuilt it several times-about $200 in new parts. Still not working 100% correctly. Shearing that bolt could be due to a number of things: worn knife clips, worn guides, guards out of line, loose sections, worn knife head, cutter bar misalignment. Jamming could be due to excessive ground speed. The shoes should be set at equal heights.

Under normal conditions the shoes are both in the raised position. If the field is trashy, the shoes should be lowered as much as possible. You can download the operator manual here Good luck.

I can't quite give up on it yet. I'm scheduled to mow on Thursday and don't have an option, so I'm putting it back together, with the adapted cutter bar from my old NI31, as many guards as I have from the MF31 that fit properly, and the new parts for the link between the wobble box arm and cutter bar. I'm short three guards, but when I get some ledger plate rivets, I can have one more - still short two. I have found that the critical dimension on the guards - other than the bolt hole location - is the vertical distance between the plane of the top of the ledger plate and the plane of the surface where the guard contacts the underside of the bar. 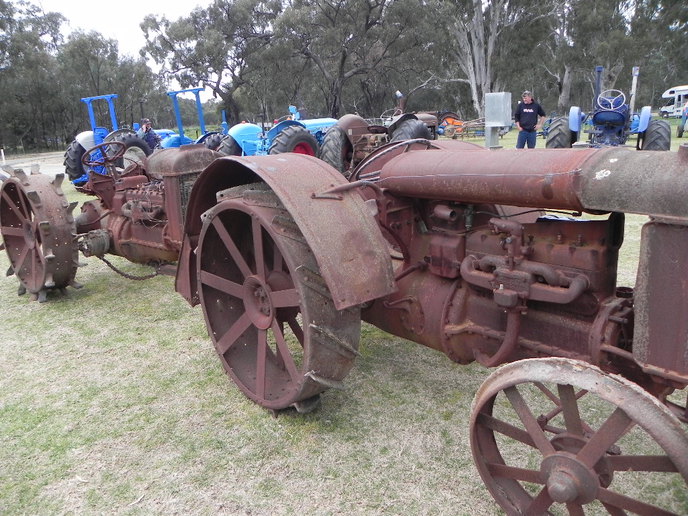 It looks like it needs to be about 5/8' or a little more. The guards I've been able to find, as well as those from the old NI30 mower - even the ones that are listed for the MF31 by the places I've tried - are closer to 1/2'. That puts the ledger plate surface too far below the bottom surface of the sections. Bending the guards up or shimming them tilts the ledger plate so it might close the gap at the front of the ledger plate, but leaves too big a gap at the back. I haven't seen a way around that, so unless I can find some guards that fit, I may end up leaving those last couple of guard locations empty and mowing as-is. I don't know what problems that might cause. Many of the ledger plates are badly worn, but I'll have to take my chances for now.

If I can find some ledger plate rivets, I can pull the ledger plates from some of the old, unusable NI30 guards that are in pretty good condition, grind a touch from the semicircular notch, and use them on the MFG guards that fit. If I can't get my MF31 working by Thursday, and can't find somebody to come in and cut it, my only option is to bush hog it and bale what I get.

The bush hog I have access to doesn't have removable sides, which, if it did, I understand doesn't chop up the hay as badly. It's a real shame to lose so much by bush hogging, but that's a last resort. This is mixed grass hay, and a lot of it is knee high or more. I'll let you know if I decide to buy another mower and get rid of this one. I've looked at a JD350 that has possibilities.

Right now, I really feel like I'm in a corner with no really good options. Thanks for your interest. In reading through Sodo's thread from January, somebody gave a link to the Agco parts book. 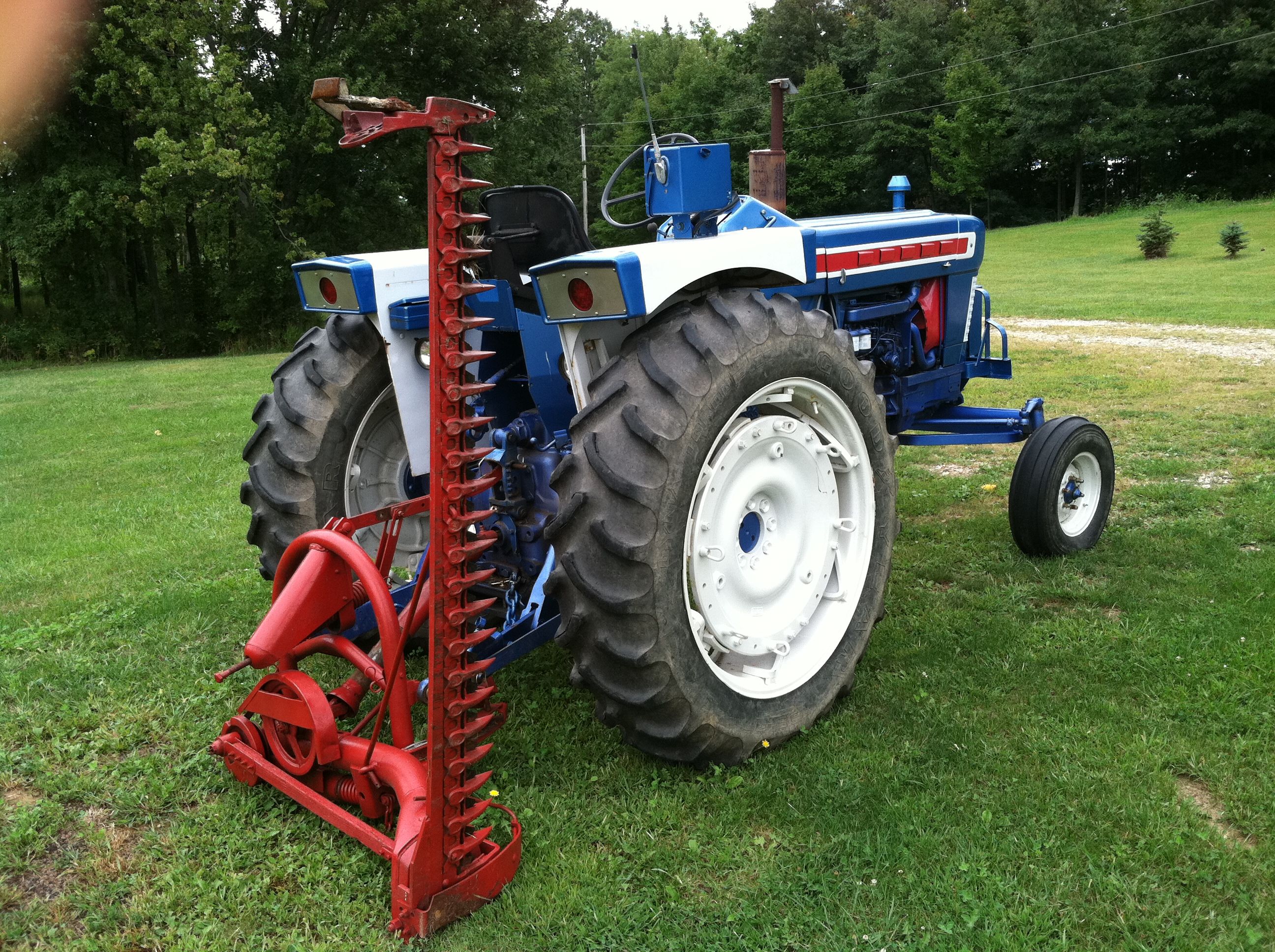 Or, if anybody has one and can post a scan or snapshot of the parts I'll describe below, I'd sure appreciate it. The first of the two things I need to look at is the exploded view of the link between the wobble box arm and the cutter bar. I have the new parts, but it's been so long since I took it apart that I've forgotten just how it goes together. I think I can figure it out, but would feel more comfortable if I had a reference to confirm. The second thing I need to look at - if there is an exploded view - is the assembly of the guards on the bar, with the hold-down clip, wear plate and shim.

My wear plates are flat, but the Operator's Manual shows a cross-section that shows L-shaped wear plates that makes more sense. My wear plates from the old NI30 are L-shaped and still usable, so I have installed them. I haven't used the shims at all since the only function I can see for them is to raise the hold-down plates for greater clearance to the section.

That adjustment is by hammer, so I can't see why the shims are needed. Some of the shims are narrower and fit properly, some are too wide. I'd like to know for sure how that assembly goes together. Any help with a parts manual or comments on the two issues would be greatly appreciated. I have another question regarding guards. I have now re-installed the guards as I described in an earlier reply to Sodo.

It bothers me that there is a good bit of variation in the gap between the ledger plates and the sections. Some are in contact and will need to be adjusted. Some are as much as 1/8', and I'm not sure if that's too much to adjust or not. All that I've read says you adjust with a small sledge hammer to bend the malleable guard up or down. That's fine for the malleable ones, but not any that are cast iron. On my old NI30, I always just shimmed between the guard and the bar at the back edge to tip it up or the front edge to tip it down.

I know that works OK for small adjustments, but not sure when it gets as much as 1/8'. Doesn't that cause a problem with the gap being a wedge instead of even between the ledger plate and section? Any solution? I can't offer much help, the whole of my experience with sickle mowers is from disassembling this MF 31 and searching for a crank repair. I may be able to offer pics though, it's possible mine is mostly original assembly. Sounds like you're deep into it.

It worries me a little that you are having trouble getting the right guards. My bar was very 'recently' rebuilt, with new cutters and new guards and slides very nicely. The guards have new paint and haven't cut many weeds, but I guess it could have been done many years ago, just before the wobble crank broke.

I'm curious, how much is 3 acres of hay worth? I have about that much too but was just planning to mow about an acre to cut the knapweed and because it looks nice but if its worth something maybe I'll think of it differently. If anyone else out there has parts for the MF31, (wobble crank and the adj.

Please review our tutorial in our How-To's section on how to best capture the posted pages to your PC, instead of trying to print them with your browser.