I bought one last year, and I love it. I bought it from american machine tools out of Chicago.

Mine is wired for 220 single phase. I got the power feed and newall dro with mine. I found that it was the smoothest of the imports, I looked at all of the imports and it was in my opinion the best buy. I was in the same boat as you, I learned on a Bridgeport so I looked for one. The Birmingham was half the price, has a warranty and could be put into immediate service. I gave up on the bridgeport early on, being in Oklahoma there just aren't many sitting around that are in great shape.

The only other mill I saw that I liked as much as the Birmingham was the Wilton. It was quite a bit more money, so I opted for the Birmingham. I recently bought a used 2000 year model Birmingham mill and have been happy with it. The fit and finish are better than most other chinese mills I've seen. Would I rather have a Bridgeport? Yes, but if you're tight on $ the Birminghams will get the job done for you. I would also recommend as a good place to purchase Birmingham mills and lathes.

Even though mine was a used machine Bill took the time to help me find parts for it and even handed me off to a sharp and helpful service guy to help me get it running right. By the way, I would strongly recommend going with the step pulley model and then adding a VFD electronic speed control on it rather than the mechanical vari-speed machine. The mechanical vari-speeds are noisier and much more likely to have trouble down the line than the step pulley machines, while the VFD's are really quiet and also give you automatic braking and controlled reversing, which is great for tapping. 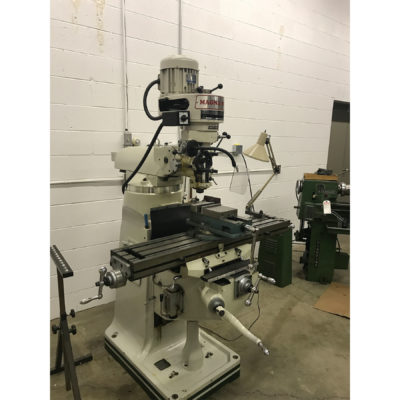 The VFD will also generate full 3 phase power from a single phase input. I bought my Teco VFD's from if you go the VFD route definitely spend the extra $30.

To get the optional braking resistor, with the resistor my spindle comes to a full stop in around 1 second, no need to grab the brake anymore. Good luck- Paul T. I have 3 lathes and limited floor space a 16X60 Birmingham is looking better every day compared to trying to find the remaining tooling for USA iron. I hate to buy from the Chicom deal but at what point does functionallity overcome time farting around looking for overpriced collector items you need to make a living? Personally I am not running a museam of USA made tools only try to make a living getting rid of the excess metal that does not look like the part on the print. Currently I have of the 3 lathes a Clausing 5914 w/taper attachment and collet closer, a South Bend Fourteen w/taper attchment and an Enco little guy made in Taiwan 1984 with collet closer and steady rest. They are all redundant and use way too many sq.

I might as well just E-bone all of them as a real good down paymnet on something else and save the room that is much more valuable. Anyone run the 16X60 gear head piece from Birmingham??

Dave, I will have a bunch of machines in about a week from now, but I don't think any Birmingham mills for a little while. They are sold at such a low price, that if I get them shipped in, I can't sell them and afford to ship them out again. But my local market should open up soon, so I will get some for stock after Christmas. If you wait until then, let me know which machine you want to see, and I will order one in for stock. Then you can get to touch it and check it out in person. However I will have about 10-15 different lathes, and also a few other mills in stock.

I will actually have over 100 machines in stock, but about 15 on display. You are welcome to come by anytime you like. Just let me know when (and wait till after Dec. 1st, or you will come see pretty much an empty showroom).

If anything i would be interested in a lathe that is a middle of the road piece to replace the group of them I have now. I have read volumes about how bad asian iron is, The iron on my CNC is asian and has held up just fine. I am just weary of being the machine rebuilder and looking for parts either on the net or paying triple of what they are worth. I looked at one site that mentioned the taper attachment for the birmingham was around 450.00 the one for my clausing if you can find it is around 750 new steady rests for close to 300 and so on. I want to make parts not surf the net looking for repair parts. As far as the argument goes about asian repair parts not existing for the price of parts to fix some of the old machines it might be smarter to just sell them and start over same goes for tooling. It is all about time and money in my mind.